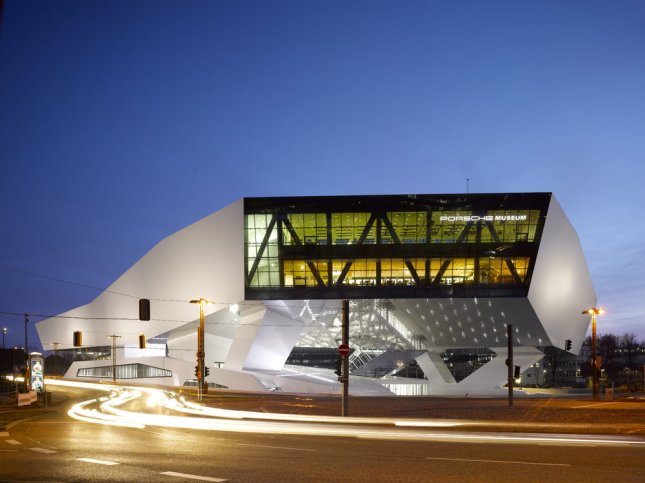 One million visitors to the Porsche Museum

Stuttgart. The museum of Dr. Ing. h.c. F. Porsche AG, Stuttgart, has passed the million visitor mark just two and a half years after opening: 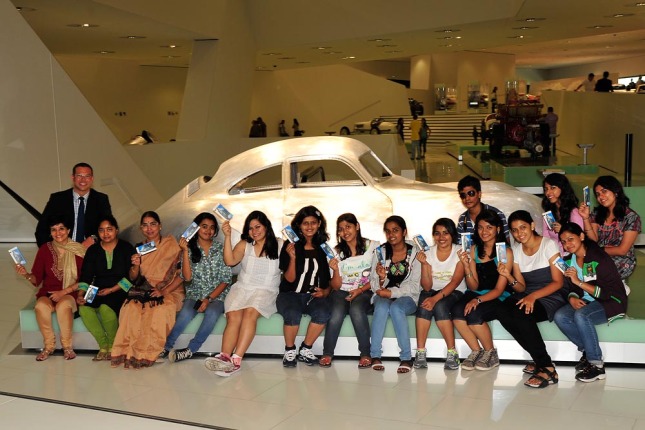 Today, museum director Achim Stejskal welcomed not just one, but 13 school children from India as jubilee guests. “We are very pleased to have been able to surprise these Indian boys and girls from Mumbai,” explained Achim Stejskal. “Almost 35 percent of our visitors are guests from other countries. Fascination for the Porsche brand and its history continues undiminished, all around the world.”

Museum director Achim Stejskal invited the class from Mumbai to take a look behind the scenes: In the museum workshop, which is not normally accessible to visitors, the school children were able to take a seat in a 1954 Porsche 550 Spyder. At the end of their visit, the young jubilee guests received a very special surprise: The Porsche Museum is to support their school project. The boys and girls construct a well in a village close to their school.

Since its opening on 31 January 2009, the Porsche Museum has provided more than 5,100 tours through the 5,600 m2 exhibition and hosted ten special exhibitions. 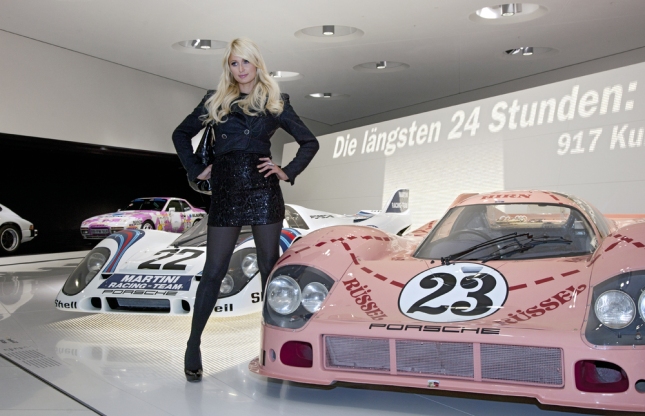 Many celebrities from all over the world, including Jerry Seinfeld, Paris Hilton, Jamiroquai, Robby Naish, Udo Lindenberg and Peter Maffay have also taken an interest in this historic vehicle collection on Porscheplatz.

Tickets sold to date would stretch a total of 150 km from Stuttgart to Lake Constance. Furthermore, since then more than 300 classics from the museum’s collection have been travelling the world as rolling brand ambassadors, attending historic racing and classic car events. 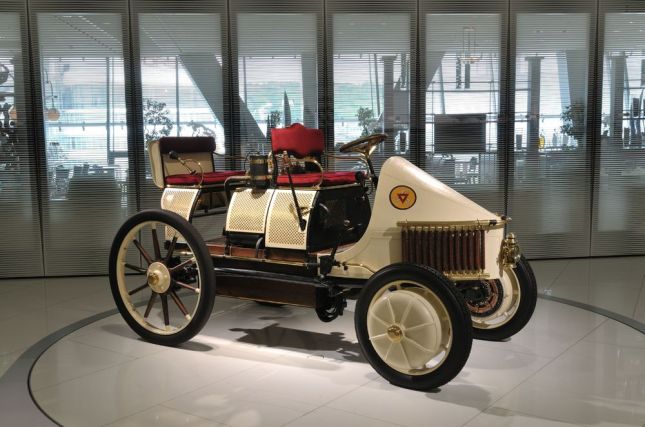 The Museum is open from Tuesday to Sunday, from 9 am to 6 pm. Entry costs € 8, € 4 for concessions. Children under the age of 14 go free when accompanied by an adult. Further information is available on the internet from www.porsche.com/museum. 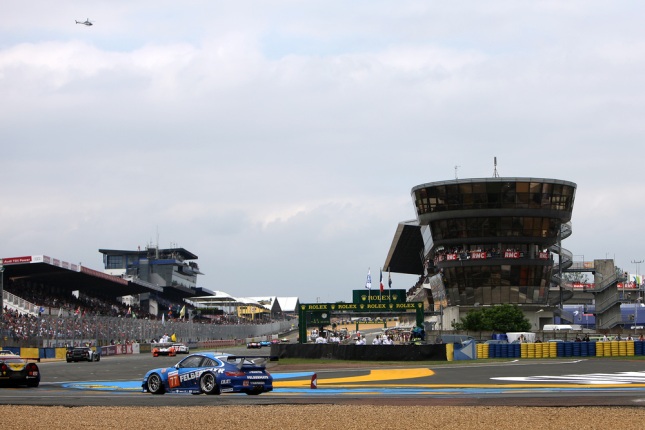 Stuttgart. Five teams, eight vehicles, 24 pilots: Porsche customer teams from Europe and the USA are particularly well represented at the 79th running of the long distance classic in Le Mans on 11/12 June.

At the toughest automobile race in the world they field a total of eight Porsche 911 GT3 RSR in the two sports car classes: GTE Pro and GTE Am. All Porsche works drivers compete – including last year’s winning trio, Marc Lieb (Germany), Richard Lietz (Austria) and Wolf Henzler (Germany). With 16 overall and 98 class victories, Porsche is by far the most successful make in Le Mans. 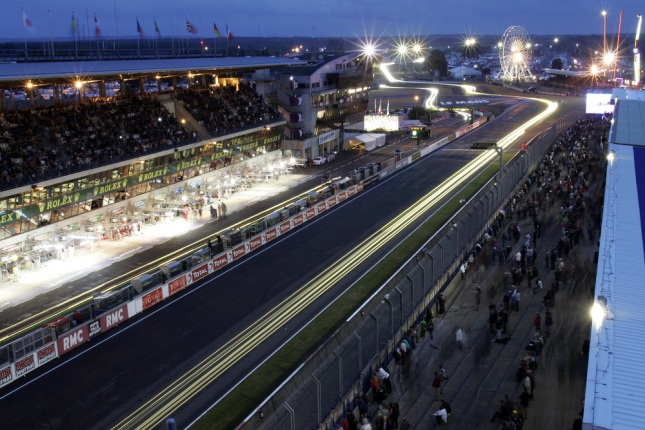 Run for the first time in 1923, the 24 Hours of Le Mans has become a legend. It is considered the toughest automobile race in the world. With 55 sports cars, the start alone guarantees goose bumps. Tens of thousands of fans flock to the town square of Le Mans to see the technical scrutineering. And for the traditional drivers’ parade which leads from the track to the city centre in the Sarthe region on Friday afternoon, enthusiastic fans line the streets. 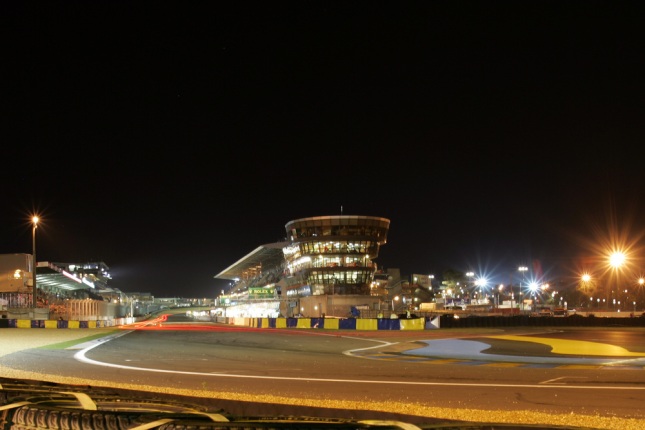 The 13.629 kilometre “Circuit des 24 Heures” is one of the world’s oldest and fastest race tracks. With around 75 percent of a lap taken at full throttle, the circuit is regarded as a serious test for the reliability of man and machine. 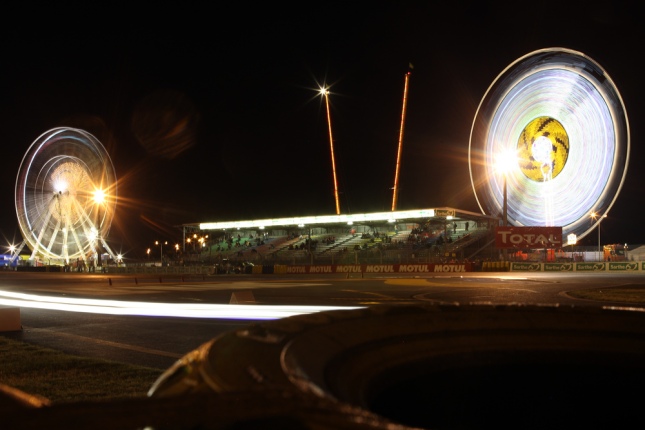 The world fame of the track is thanks not least to the legendary Hunaudières straight, where top speeds of up to 400 kph were reached before it was tamed by two chicanes in 1990. Also the ultra-swift passage with the Porsche curves demands everything from race drivers.

Exactly 60 years ago, the maiden outing of a race car from Zuffenhausen marked the beginning of the unprecedented success story of Porsche in Le Mans. Even in the early years, typical Porsche virtues – like lightweight construction, aerodynamics and reliability – played a prominent role in the many class wins. However, the path to the first overall win was rocky. In 1969, in the closest Le Mans finish in history, Porsche missed out on victory by a mere 75 metres or a good one second.

But the breakthrough in 1970 was all the more convincing. On 14 June, drivers Hans Herrmann and Richard Attwood celebrated the first overall victory with the legendary Porsche 917 short-tail, with two other Porsche teams making the triumph perfect with second and third place. Fifteen further overall wins followed – and last year, 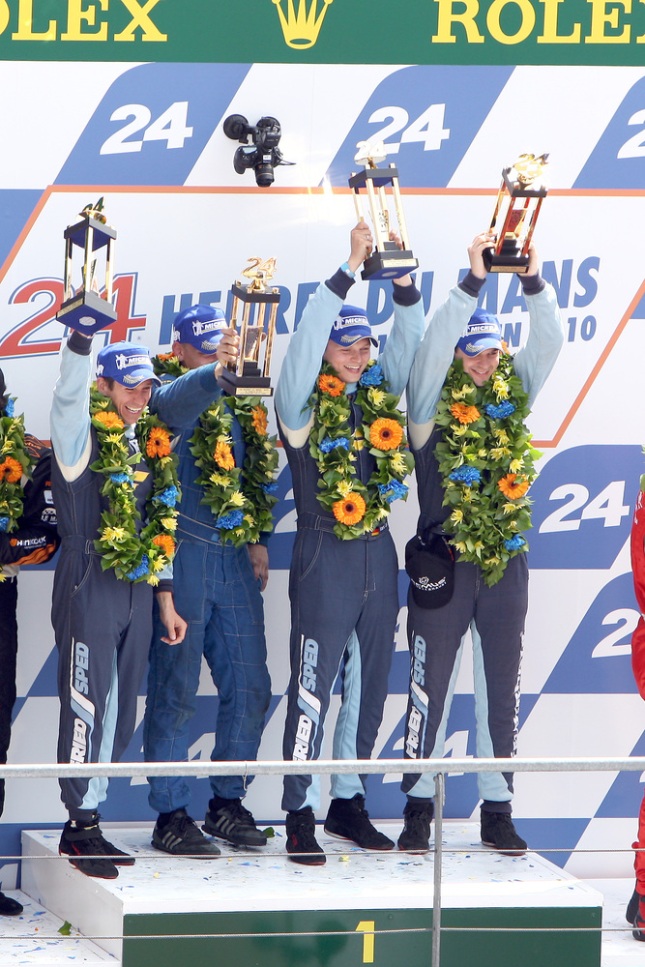 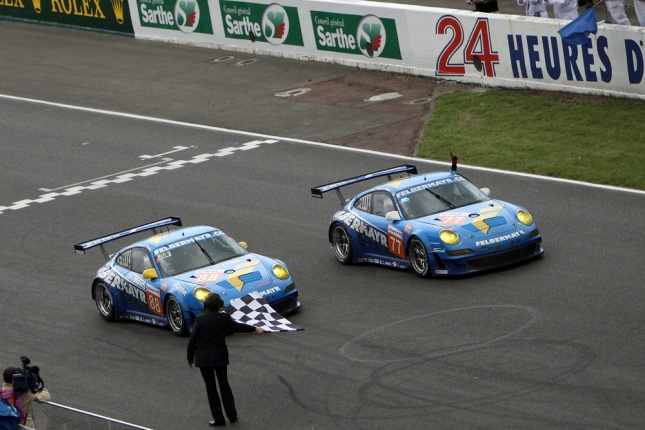 With the same line-up, last year’s winners return to the site of their success. For Marc Lieb and Richard Lietz, 2010 yielded their second class wins in Le Mans (after 2005 and 2007 respectively). Wolf Henzler climbed to the top of the podium for the first time. Title defender Felbermayr-Proton fields the 2011-version of the 911 GT3 RSR in the GTE Pro class.

The American Flying Lizard Motorsports team competes with the punchy works driver pairing Joerg Bergmeister (Germany) and Patrick Long (USA) at the wheel of a 911 in the Pro-category. Together, they claimed a Le Mans class win in 2004, with Patrick Long also achieving success in 2007. The multiple champions of the American Le Mans Series receive support from Lucas Luhr (Switzerland), who celebrated GT wins in Le Mans with Porsche in 2002 and 2003.

The French Porsche works driver Patrick Pilet shares driving duties with his compatriots Raymond Narac and Nicolas Armindo in the 911 GT3 RSR of IMSA Performance Matmut. Whilst team owner Narac has extensive experience in Le Mans, Armindo, as reigning champion of the Carrera Cup Deutschland, gives his debut at the endurance classic.

The youngest Porsche works driver, Marco Holzer (Germany), drives for the Belgian ProSpeed Competition team. The 22-year-old celebrated his Le Mans premiere in 2010 with a podium result. He shares the cockpit of the GTE Pro 911 with Marc Goossens (Belgium) and Jaap van Lagen (Netherlands).

At the wheel of the fifth 911 GT3 RSR in the GTE Pro class, also fielded by Felbermayr-Proton, are Britain’s Nick Tandy – the current leader of the Porsche Mobil1 Supercup and the Carrera Cup Deutschland – as well as Bryce Miller (USA) and Abdulaziz Faisal (Saudi Arabia).

Racing in the GTE Am sports car category, in which only one professional race driver per vehicle is permitted, are three further 2010-spec 911 GT3 RSR. Taking up the challenge for Flying Lizard Motorsports are Americans Seth Neiman, Darren Law and Spencer Pumpelly, for Proton Competition are team boss Christian Ried (Germany) as well as Austrians Horst Felbermayr Senior and Junior. And Frenchmen Christophe Bourret, Pascal Gibon and Jean-Philippe Belloc race for Larbre Competition.

Marc Lieb: “When you think of Le Mans you get goose bumps. It’s great to be racing with Richard and Wolf for our Felbermayr-Team again. Victory last year took a huge effort. Now the competition is even stronger. In our class alone, 18 cars from six well known manufacturers are fighting for victory. Even if the full throttle passage suits our car, the race will be a damn hard nut to crack.”

Richard Lietz: “With two Le Mans class wins under your belt of course you don’t mind travelling to the Sarthe. Le Mans for me is something special because you get action all week long. As a driver you can get really close to fans, you’re signing autographs practically non-stop.”

Joerg Bergmeister: “When you take a look at the names on the starter list you first have swallow hard. It’s going to be tough! We’re really well sorted this year with Flying Lizard. Last year we experienced bad luck in Le Mans. A podium place would be a great reward for the team.”

Patrick Long: “I love the challenges of this circuit, especially the fast, flowing corners. Now that’s great fun in a well set-up 911. I’m particularly looking forward to racing with Joerg this year. And Lucas Luhr fits in well with us. We’re a strong combination.”

Patrick Pilet: “We’ll be going all out, but we also want to enjoy the event. The circuit and the atmosphere are unique. For my driver colleagues and the team, our home race in Le Mans is of course the highlight of the season.”

Marco Holzer: “To stand on the top of the podium in Le Mans is incomparable. Below you thousands of people are swarming around the race track and cheering. It’s something you never forget. And it was even better that I did it as a rookie in 2010. My goal this year is to repeat this success.”

Hartmut Kristen, Porsche Head of Motorsport: “Our customer teams and we face even bigger challenges through the division into the two sports car classes GTE Pro and GTE Am because different vehicles are fielded: in the Pro class we have the 2011 version of the 911 GT3 RSR, in the Am class we have 911 race cars in the previous year’s spec. That the event organizer ACO has issued many special dispensations specific to models and that there is now the ‘balance of performance’ in Le Mans means for our customers in the GTE Pro category that there is no real equality of arms. Regardless of this, we and our teams will prepare ourselves well and we’ll turn to all the factors that we can influence.”

Eurosport broadcasts extensive coverage from Le Mans on its free-to-view station and the Pay-TV channel Eurosport 2. From Monday, 6 June, the latest preliminary reports and background stories will be televised daily on Eurosport under the title of “24 minutes before Le Mans”. The free practice, the final qualifying and the warm-up will also be shown. Around 15 hours of the race can be seen live on the main station.

This is the Le Mans 24 Hours

With grid line-up of 55 vehicles, the 24 Hours of Le Mans consists of two different sports car categories: sports prototypes and modified standard sports cars. The technical regulations of the European Le Mans Series (LMS) and the American Le Mans Series (ALMS) correspond to those of the 24 hour race. All race cars start together in Le Mans; there is an overall classification and a classification for individual classes.

The four classes in Le Mans:

GTE Pro class: The most popular class of car manufacturers (formerly run as the GT2 class) is traditionally the best supported: Modified sports cars with up to 500 hp and a minimum weight of 1,245 kilograms.

GTE Am class: Like the GTE-Pro, but with the 2010-vehicle specifications. Moreover, the regulations stipulate that each vehicle must have one professional driver at the most.

LMP1 class: Sports prototypes with up to 550 hp and a 900 kilogram minimum weight.