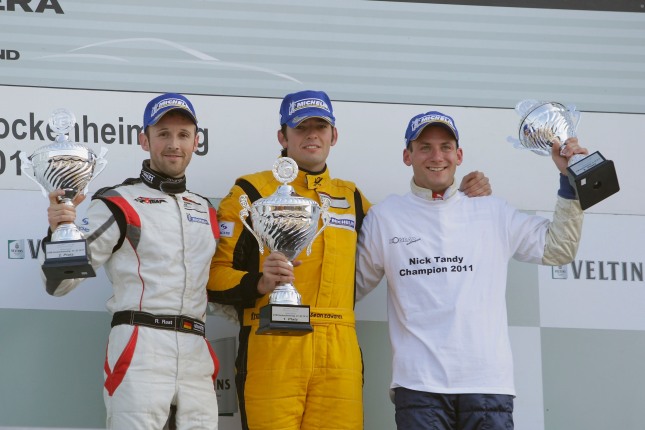 Stuttgart. It was a thriller for the championship title that couldn’t have been more gripping. In the end, third place was enough for Nick Tandy to win the prestigious trophy in the Porsche Carrera Cup Deutschland. 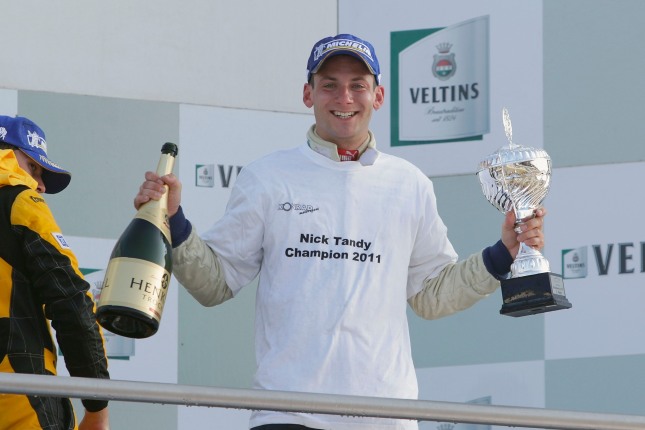 This marks the greatest motorsport success in the career of the 26-year-old Konrad Motorsport pilot from Britain.

“I couldn’t be happier,” said the clearly emotional new champion. “This is for sure the best thing that has happened in my life to now.”

His toughest rival in the title bid, compatriot Sean Edwards, crowned his second season in Germany’s fastest one-make cup with a victory at the final round. 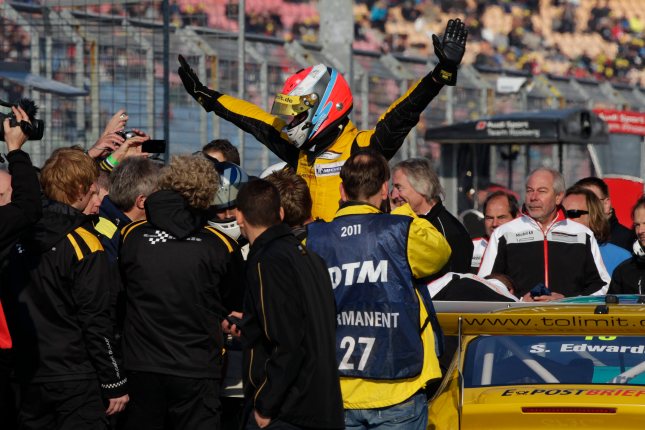 With this, he secured vice championship honours and helped his Deutsche Post by tolimit team to win the team championship. 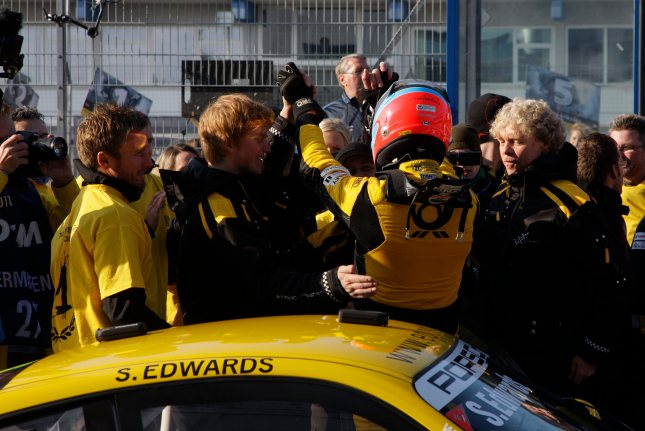 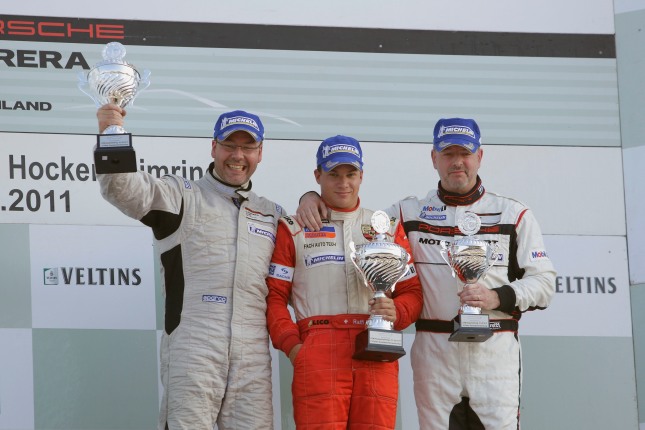 Taking up the race from pole position, the initially cautious Nick Tandy let his rival Edwards and Förch Racing pilot René Rast (Germany) pass in the first race laps – after all, he had a twelve-point advantage in the standings over his closest pursuer Edwards. 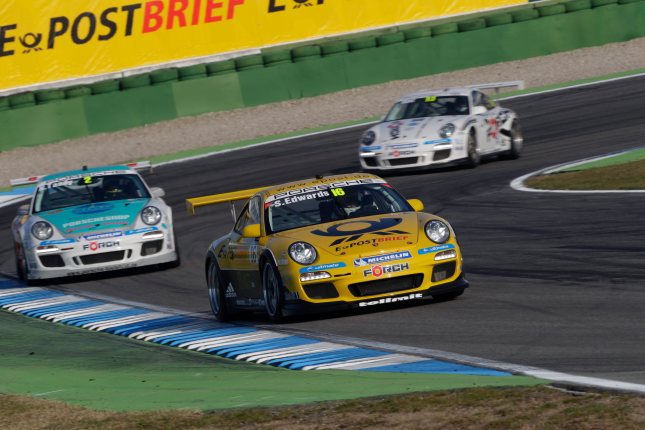 While Edwards could pull away after several laps, Tandy stuck to the bumper of Rast’s 911 with his Porsche 911 GT3 Cup. In the tenth lap, the Briton overtook the German and set out to chase the leading Edwards – which obviously made his team boss Franz Konrad nervous. 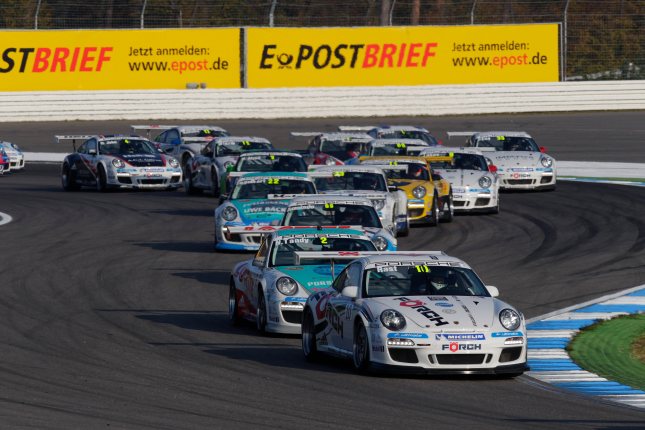 The shock for the Konrad Motorsport squad hit home about four laps before the flag: Tandy’s pace slowed, Rast held tight to second. What was happening to Tandy? Sensing their chance to snatch a podium spot, three Carrera Cup specialists closed in from behind. 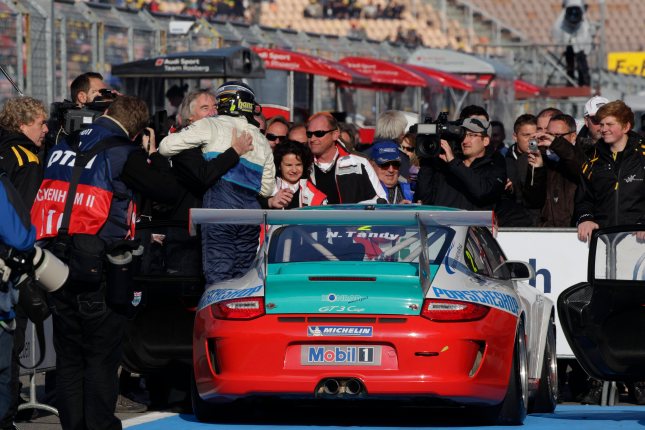 Finally, despite a problem with the front left wheel, Tandy was able to bring home third place – and the championship title for the three-time race winner. Claiming second place at the final, René Rast moved one position up the points’ table to conclude the season in fifth place overall.

The old champion of 2010, Nicolas Armindo, saw the flag in fourth. Driving for Hermes Attempto Racing, the Frenchman concluded an extremely difficult season without any podium spots with a conciliatory result.

Fifth position for Zandvoort winner Jeroen Bleekemolen was reason to celebrate for the Dutchman, who turned 30 today.

As the second pilot of the Deutsche Post by tolimit team he secured third place overall in the German makes cup, which was characterised by an incredibly high level of competition this year. This position is all the more impressive by the fact that the double Supercup champion Bleekemolen had missed two Carrera Cup races due to his commitments in the American Le Mans Series. 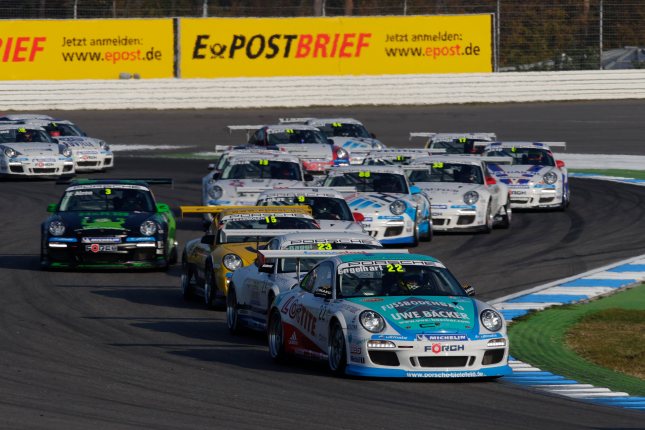 For Christian Engelhart (Germany) the main priority as a guest starter for Konrad Motorsport was to assist the team in collecting points. And this worked. Engelhart came sixth, and Franz Konrad was rewarded with second place in the team classification.

Lausitzring winner Nicki Thiim (Denmark, Hermes Attempto Racing) was somewhat disappointed about his seventh place at the final round. At the penultimate round in Oschersleben, the son of the former DTM champion Kurt Thiim was still ranking third overall, but was shunted into fourth by Bleekemolen.

Eighth place out of the 30 competitors went to Austria’s Martin Ragginger.

Having taken up the 18-lap race from fourth, the Schnabl-Engineering pilot lost many places in the first lap. He winds up the season as seventh overall in the standings.

“I’m very pleased with my second Carrera Cup win and the vice-championship. Of course I’m a little disappointed that I didn’t win the title; my bad luck at the Nürburgring was the reason. But this weekend we showed that we have a winning car. I’m very happy with the result, and I’m particularly pleased that my Deutsche Post crew has won the team championship, they are over the moon. And congratulations to Nick – after all a Briton has won the title.”

“I’m really very happy to conclude the season with second place. Sean was too fast at the front, I didn’t have a chance. It’s also wonderful that we earned fourth place in the team classification for our Förch Racing team.”

“We’ve been working for this for the last two years and now we’ve done it. I couldn’t be happier. This is the best time of my life. I’m so unbelievably thankful to all those in my team who contributed to this success. The race was obviously incredible. I didn’t have to win to claim the title, but my car was so good by midway through the race that I could have done it. After all, that’s what we are here for – to win races! Several laps before the end there was something wrong with my right front wheel, I don’t know what it was. But my heart fell into my boots. I’m so relieved and happy that it was enough to bring home the trophy.”

On 28 October, TV station Sport1 televises the race review, interviews and reports of the finale from 17.30 to 18.00 hours in the “Carrera Cup Magazin” and broadcasts a one hour programme of season highlights of the Carrera Cup Deutschland on 29 October from 13.45 hrs.