Photographer Clint Davis Photo got the call from Panorama (Porsche Club of America) to ask if he could make the drive to Tennessee to photo shoot Dario Franchitti (famous race car driver) and his insanely immaculate, but well driven 1973 911E hot rod. 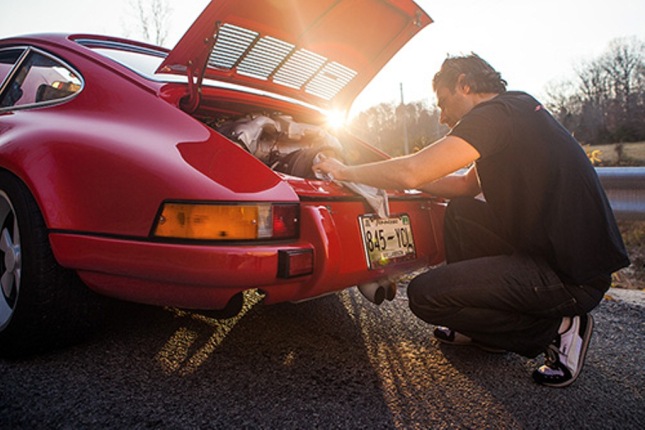 When meeting Dario as he was pulling his 911 out of the driveway, you could tell this Porsche isn’t just another car in his garage.

More pictures from the fantastic photo shoot and read all about at Clint Davis’s blog>>
http://www.clintdavis.net/blog/2013/01/dario-franchitti-porsche-911-hot-rod/

All photos by Clint Davis Photography

Or see it all in the next issue of Panorama Magazine for Porsche Club of America.

David Conklin did a superb job with the article, yet I’m afraid to say that the magazine can only be picked up if you’re a Porsche Club of America member, or know someone who is a member!

The entry marks the first time a mother and son will compete in this storied race, as Melanie Snow and her 17-year-old son Madison are two of five drivers of the Wright Motorsports/Snow Racing Porsche GT3 Cup No. 62 sponsored by Universal Industrial Sales (UIS) and Bilstein Shocks. Headquartered in Lindon, Utah, UIS is among the largest suppliers of overhead sign structures and fabricated highway products in the country.

The other three drivers in the very strong line-up are Porsche veteran Sascha Maassen, 43, of Lontzen, Belgium; Porsche junior driver Klaus Bachler, 21, of Unzmarkt, Austria, who has been competing in the Porsche Mobil 1 Supercup; and top Porsche driver and instructor Marco Seefried of Wemding, Germany, 36. He’ll compete in two 24-hour races this month, as he is driving a Porsche 911 in the 24 Hours at Dubai Autodrome at press time.

Wright Motorsports/Snow Racing’s white, red and black Porsche is currently one of 36 entries in the Grand Touring (GT) class for the Rolex 24.

Both Melanie and Madison Snow are making their first Rolex 24 starts, although they have extensive experience in other series. Along with her husband, Martin Snow, and another driver, Patrick Huisman, Melanie Snow was part of the winning GTS entry at the Twelve Hours of Sebring in 1999 in a Porsche 911 Turbo. 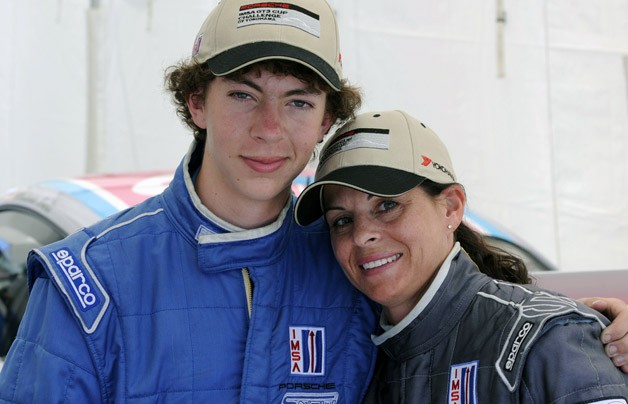 Madison Snow, of Lehi, Utah, started racing at the age of 4 in karts.

He finished second overall last year in the top class of the IMSA GT3 Cup Challenge by Yokohama with three victories in a car prepped by Wright Motorsports. When he clinched that series’ Gold Cup championship in 2011 when he was 15 he became the youngest Porsche one-make Cup champion in history.

Maassen has won the 24 Hours of Le Mans twice and both the Twelve Hours of Sebring and the Petit Le Mans four times. He was the ALMS GT champion twice and he has also won the ALMS LMP2 championship and the FIA GT championship. He is also an instructor for Porsche, and one of his students is Bachler.

All five drivers participated in the official test for the event Jan. 4-6 at Daytona, where they logged 279 laps around the 3.56-mile, 12-turn road course that also incorporates most of the oval. They were in the top five in half of the eight test sessions, they were only out of the top 10 once, and they topped the charts in Practice 3.

“There were 12 hours of testing available, and we put 11 hours on the car,” said Wright Motorsports owner John Wright, who is participating in this race for the 19th time. He has been on the podium at this event many times in various roles, most recently in 2009 when he was the team owner/manager of the car that finished third in the GT division. Maassen was one of the drivers in that effort.

“The car was strong; we were fast at the test,” Wright said. “All the drivers showed good pace; there isn’t a weak link in our driver line-up, and the team is gelling nicely.

“In addition to UIS and Bilstein, we’d like to thank Porsche Motorsports North America for all their help, especially the guys who work in the engine and parts departments, and the phenomenal track support that they supply,” Wright added. “Running a 24-hour race is a big undertaking, but they make it a lot easier.”

Wright also stressed that it’s a pleasure to work with Martin Snow. “He brings so much experience to the program,” Wright said. “I don’t have to explain how endurance racing works to him. We get right down to business. I hope together we can make this Rolex 24 a winning performance.”

Wright Motorsports is coming off a sensational season in which its drivers finished first, second and third in the driver point standings and it won the team championship and Rookie of the Year award in the IMSA GT3 Cup Challenge by Yokohama. The team won 11 of the 15 races and had 27 podium finishes and 12 poles in that series last year with a driver line-up that included both rookies and veterans, just like it will have at the Rolex 24.

“We enjoy combining veterans with rookies,” Wright noted. “We pride ourselves on our driver development program. It fits our business model well, and it’s a way for us to help mold the sport’s future.”

“I am really looking forward to the Rolex 24 Hours of Daytona. It is my first 24-hour race and my first race in the United States. Last week we had three good test days, and I think we will have a good car for the race. I feel good about the team and my teammates. Wright Motorsports is really professional. I can’t wait for the race!”

“I am looking forward to the start of the 2013 racing season. John Wright and I have already had some success at the Rolex 24, finishing on the podium. And I’m also looking forward to working with the Snow family. I raced with Martin a few years ago at Daytona and I coached Melanie and Madison in 2011 at some IMSA Cup events. Another thing I’m looking forward to is racing with Klaus Bachler, the Porsche junior driver, whom I am normally coaching in Europe. Together with Marco Seefried, we have a very strong line-up.” 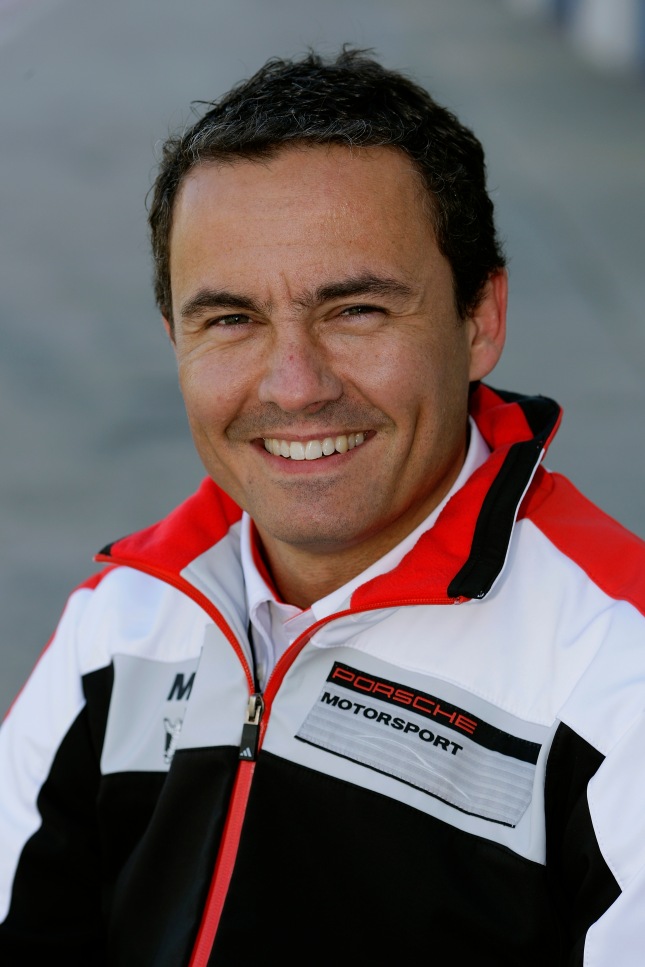 (Quote translated from his website, as he was racing in Dubai at press time): “The 24 Hours of Daytona is one of the world’s most important endurance races. The first time I drove at Daytona was during the test. We reeled off a comprehensive program with our Porsche 911 GT3 at the test. Our driver line-up is very balanced, which in a long-distance race is a great advantage. During the night practice I was able to set the third-fastest lap in the GT class. It was a great result against very strong competition. I’m happy to be racing after the long winter break, and I’m looking forward to competing at Daytona very much.” 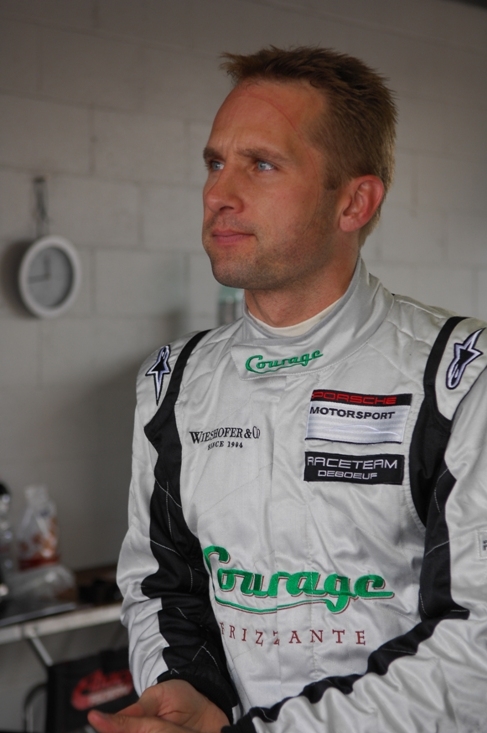 “The test went much better than I expected. I had assumed we would have a few fast people, but I didn’t think that everyone on our team would be this fast.

“The thing that surprises me is how well we all get along together. After the sessions when we went over the car and how it felt, I was surprised that we all felt the same thing. I’ve heard stories of teams when drivers all have different styles and so it is hard to set up the car for everyone, but we all get along and drive so similarly that it makes it much easier.

“I can’t wait for the race because I know we have such a good driver line-up and that we can win the race. I feel like we are the best team there because we get along so well with each other — drivers and crew. That is the difference from us to everyone else out there. This race will be really good for all of us. It’s the first 24-hour race for my mom and me so I really hope we are able to come out on top together.”

“Wow, what a fun test at Daytona! I am really excited to be racing there. This will be my first 24 Hours of Daytona race. Having been there many times before, supporting Martin, I know the feeling of excitement that is spread throughout the track. I was never able to race at Daytona before, as when I had other opportunities I was pregnant or had a baby with me.

Finally, I get to race it, and what makes it so special is that I get to race it with Madison. My first time at Daytona with Martin, Madison was with me and he was just 6 weeks old. Now he is racing it with me; how time flies!

“Sascha, Marco and Klaus are such a great asset to our team. We have a wonderful dynamic and work so well together. Wright Motorsports has prepared our UIS Porsche and they have done an amazing job. The car was flawless at the test and we had some really good times. Between our drivers and our hard-working crew we have the best team! I can’t wait to get back to the track and get the race started!”

Wright Motorsports is the premier Porsche tuning facility in Ohio and a multi-series, international racing team known for superb car preparation, expert race strategy and driver development. Located in Batavia, near Cincinnati, it is owned and directed by John Wright, a certified Porsche factory-trained technician. As a crew chief Wright has played a key role in winning seven driver and six team championships in World Challenge, IMSA (ALMS) and the Grand-Am Rolex Series.

In 2013 Wright Motorsports will defend its 2012 driver and team championship and field multiple entries in the IMSA GT3 Cup Challenge; service its customers who compete in other series and club-racing events, and provide race car-quality preparation for its customers’ high-performance street cars. For more information see WrightMotorsports.com on the Internet and follow it on Facebook and Twitter.