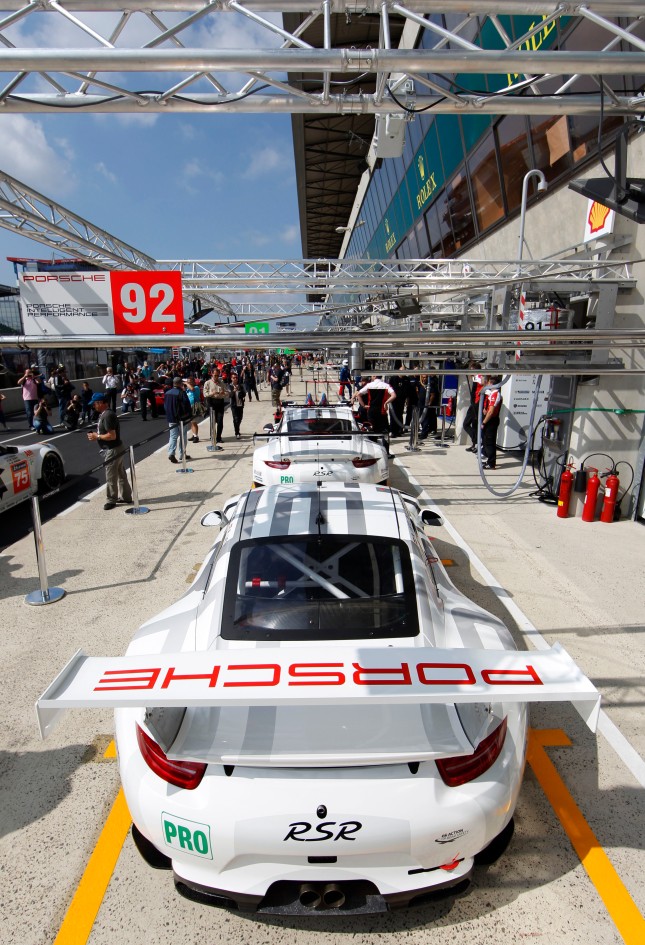 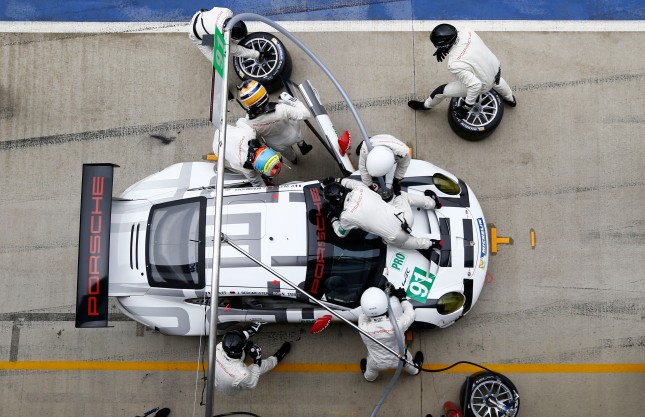 Stuttgart. It was a debut made to order: At its first ever outing at the 24 Hours of Le Mans last year, the Porsche 911 RSR brought home a double victory. At the 82nd edition of the world’s most famous long distance race, contested on the Circuit des 24 Heures on 14/15 June, Porsche Team Manthey will again field a pair of 911 RSR in the GTE-Pro class. Taking up the challenge alongside the factory squad, Porsche customer teams from Europe and America again contest the GTE-Am class, which Porsche also won last year. The classic event in provincial France, where Porsche is chronicled as the most successful manufacturer with 16 overall victories, is regarded as the highlight of the Sports Car World Endurance Championship (WEC).

The race
First contested in 1923, the 24 Hours of Le Mans is the toughest automobile race in the world and represents the greatest challenge motorsport has to offer. What makes this classic so unique is also the 13.65 kilometre “Circuit des 24 Heures”, one of the oldest and fastest race tracks in the world with 38 corners and the legendary five-kilometre long Mulsanne straight. Almost 75 percent of a lap is driven at full throttle.

The Porsche 911 RSR
The Porsche 911 RSR which Porsche has campaigned in the Sports Car World Endurance Championship since 2013 is based on the seventh generation of the iconic 911 sports car. At its race debut last year the 470 hp winning racer from Weissach scored a brilliant double victory at the 24 Hours of Le Mans. For 2014, the 911 RSR received improvements in many areas. In addition to winning the WEC season opener at Silverstone, this racer has also clinched victories at the long distance classics at Daytona and Sebring. Through the balance of performance ruling, the 911 RSR for Le Mans must now weigh 25 kilograms more than last year’s contender, with the restrictors reduced from 29.6 to 29.3 millimetres.

TV tips
Eurosport International and Eurosport 2 alternately broadcast the complete race live. The last two hours of free practice as well as the three qualifying sessions and the warm-up are also televised live. Also aired during the week are various programmes highlighting the world’s most famous long distance race with news, interviews, portraits and background reports. Detailed TV information is available on http://www.eurosport.com.

“Le Mans is the highlight of the year. For our teams and drivers this race represents an exceptional challenge – and we’re feeling highly motivated and very well prepared. After our double victory at the season-opener in Silverstone, our car now has to carry 25 extra kilograms of ballast and the diameter of the two restrictors is now 0.3 millimetres smaller than last year’s. When considering the additional changes made, as against 2013, at one or the other competitor one has to question to what extent is the Balance of Performance actually balanced. We feel it is a matter of utmost urgency in the spirit of the sport to find a regulation for the classification of vehicles where you don’t have to fear being punished for a good performance, like what happened to us after Silverstone. Nevertheless, we’ll work extremely hard to do a good job at Le Mans – just like last year.”

“I’ve raced at Le Mans since 2002 and it’s a fantastic feeling to be back again this year. It’s the season highlight for me. This race has a very special atmosphere and it’s always incredibly demanding. More than anything I enjoy the extremely fast corners, they’re the most fun. Last year we came second behind our teammates and I wouldn’t mind at all if we switch positions this year.”

“Le Mans is a very special race, especially for me as a Frenchman. It’s always an incredible feeling to go racing on such an extreme circuit in front of so many fans. Aside from the Indy 500 and the Monaco Grand Prix, Le Mans is the greatest race on Earth. We are well prepared and our 911 RSR is a strong contender, especially on the long straights. It would be fantastic if we could turn this into a win. We were so close last year.”

“Ever since I began racing for Porsche at Le Mans in 2010 it has been my goal to secure a podium spot here. You only get this chance once a year and I’ll do everything within my power to make it happen. For a race driver, Le Mans is a magical place. Even when you arrive in the paddock you get a sense of the great history. And the Circuit des 24 Heures is something very special with its unique combination of race track and normal country roads. It’s an honour for me to drive again for Porsche at Le Mans this year.”

“At my first race in Le Mans in 2010 we managed to achieve a podium finish with third place. When I think back to the cheering crowds at the award ceremony it still sends shivers down my spine. I’d very much like to experience this feeling again and our chances don’t look too bad. We have a great car and a strong team behind us. But in Le Mans you can’t afford to make one mistake. You have to be totally focussed otherwise you can forget it.”

“As a Frenchman you simply have to race at Le Mans. And you want to win. Your family is watching at the track, your friends are there supporting you. This makes it hugely motivating to achieve everything you’ve set out to do. As a child I dreamed of Porsche. I launched my racing career with Porsche. If I could now win Le Mans with Porsche, well that would just be the best thing in the world. But first we have to face 24 gruelling hours where pretty much anything can happen.”

“I have many wonderful memories of Le Mans, especially my wins in 2007, 2010 and 2013. It’s the greatest race in the world. I love it. If I couldn’t be here as a driver, I’d buy a ticket and watch the race as a spectator. Earlier, only victory in Le Mans counted. Since 2013, it has become part of the Sports Car World Endurance Championship which means that if you can’t win then you have to make sure you bring home as many points as possible. The connection between Porsche and Le Mans is pure racing fascination. Getting the chance to compete at Le Mans for Porsche, the most successful manufacturer in the history of this race, is motivation enough. You automatically do your absolute best to win.”

“Le Mans is always a huge challenge. Everyone wants to win, regardless of the category they’re contesting. I’m really looking forward to racing with Patrick Dempsey and Joe Foster and helping the whole team to fulfil their dreams at Le Mans. Last year we narrowly missed out on a podium spot. This time we’re determined to make it.” 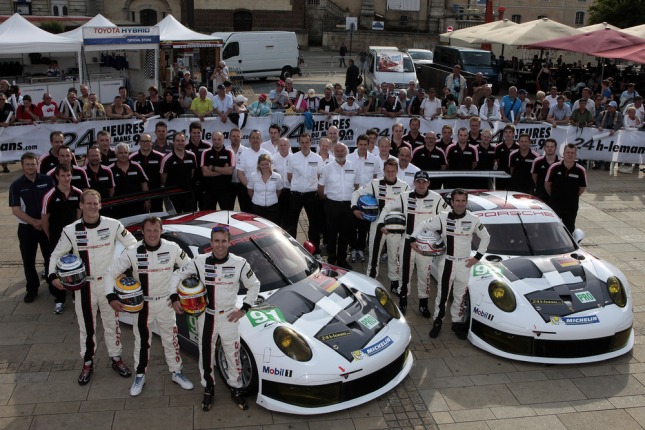 Stuttgart. Porsche AG Team Manthey used the first qualifying for the Le Mans 24 Hours on Wednesday primarily to work on the set-up of the new Porsche 911 RSR for its first outing at the world’s most famous long distance race. 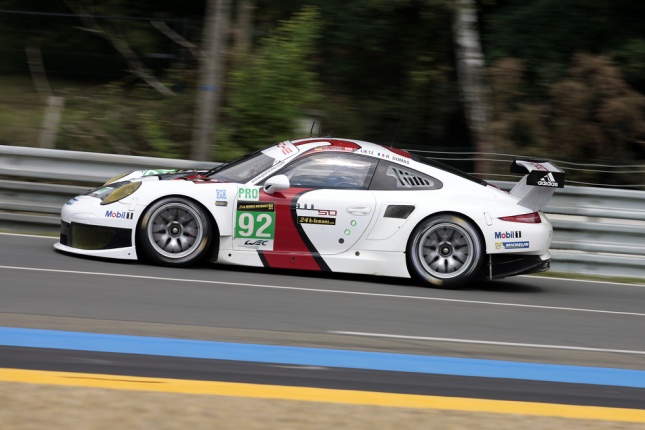 The 911 RSR with the starting number 92, shared by Porsche works drivers Romain Dumas (France), Marc Lieb (Germany) and Richard Lietz (Austria), performed impressively in free practice by setting the best time in the GTE-Pro class, and went on to post the fifth quickest time during the first qualifying held in the night. 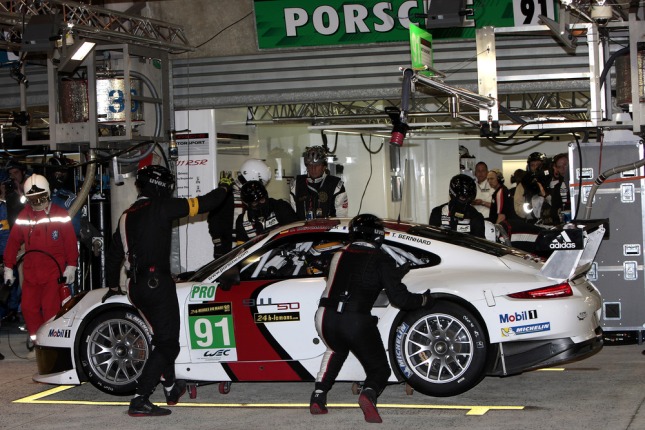 At the wheel of the second 911 RSR with the starting number 91, their works driver colleagues Joerg Bergmeister (Germany), Timo Bernhard (Germany) and Patrick Pilet (France) were clocked as seventh fastest. 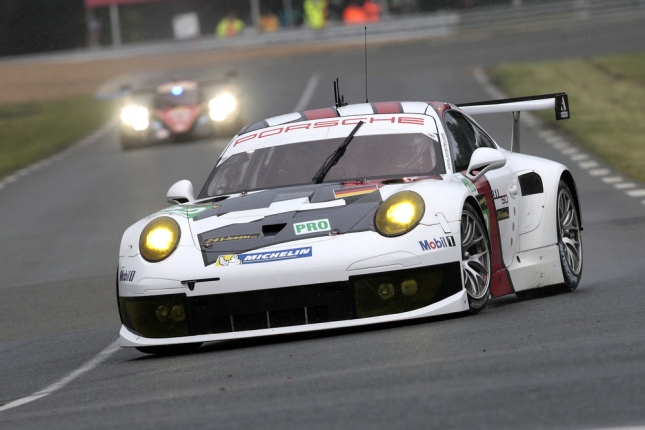 The best Porsche in the GTE-Am class was the 911 GT3 RSR run by Proton Competition on second place. Christian Ried (Germany) and his Italian teammates Gianluca Roda and Paolo Ruberti share the cockpit. 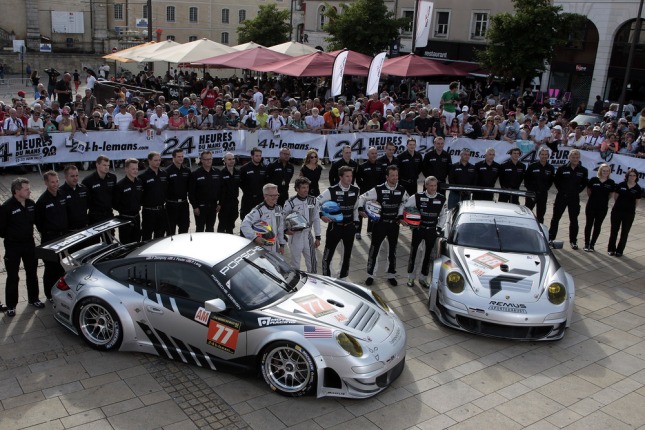 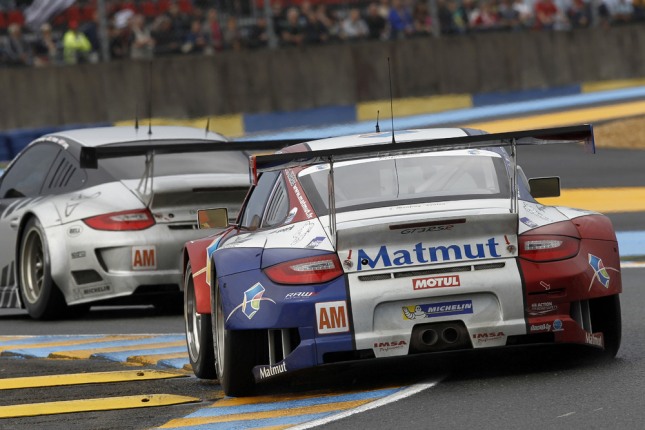 In the 911 GT3 RSR fielded by the Dempsey Del Piero Proton squad, the all-American line-up of Hollywood star Patrick Dempsey, 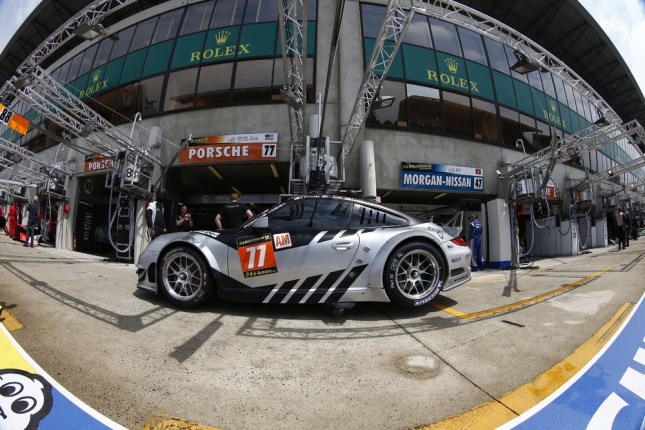 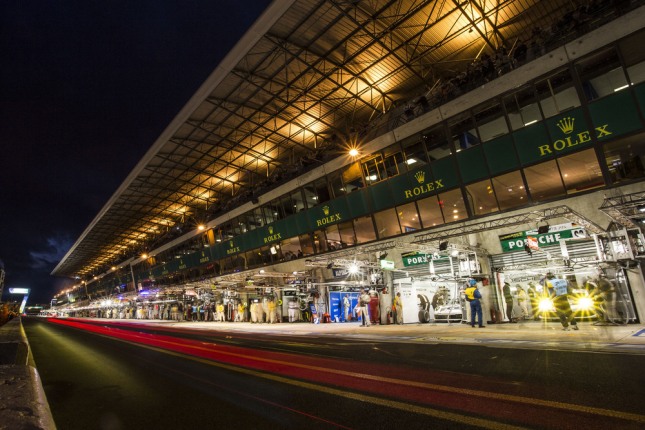 Quotes after the first qualifying 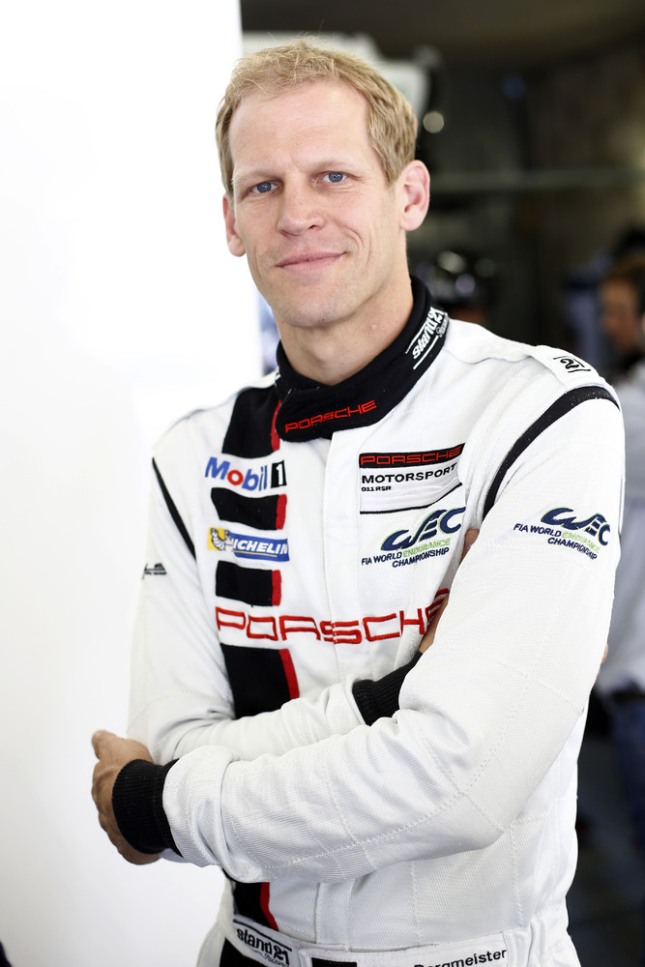 “My main priority was to turn my mandatory laps. I was driving on used tyres and everything went really smoothly. As a driver you’re never really satisfied but I think that as far as the race is concerned we are on the right track.” 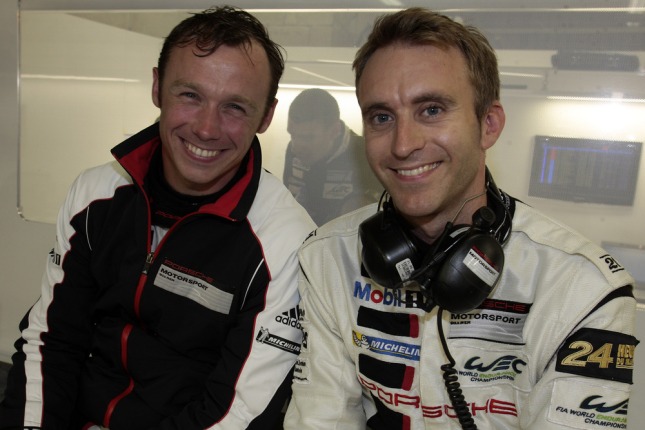 “The balance of the car was okay. On the fastest lap I encountered a lot of traffic which cost me some time. For tomorrow we have to keep working on the balance.”

“Today wasn’t really a labour-intensive day. In free practice I turned three laps before the session was red-flagged. When I wanted to climb in the car for my last qualifying stint the red flag came out again and after that it was no longer possible to do anything. Now I hope that I get to drive a bit longer tomorrow.” 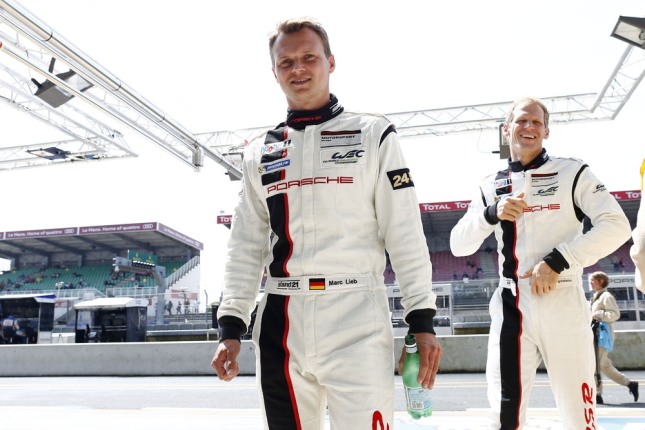 “The qualifying was quite good. I went out on used tyres and that worked well. I’m happy with the car’s balance. Of course we have to tweak the set-up but I think that we’ll manage that before the race. Compared to Spa and Silverstone we’ve made great strides.” 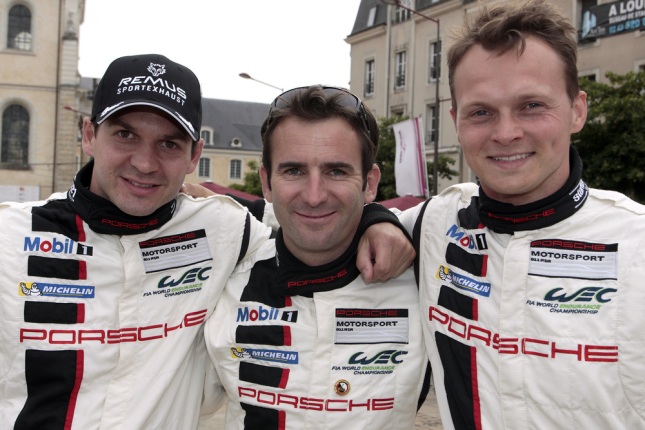 “My first lap was really good, but I spun in the second. Luckily nothing happened and I then had no problems on the second set of tyres.” 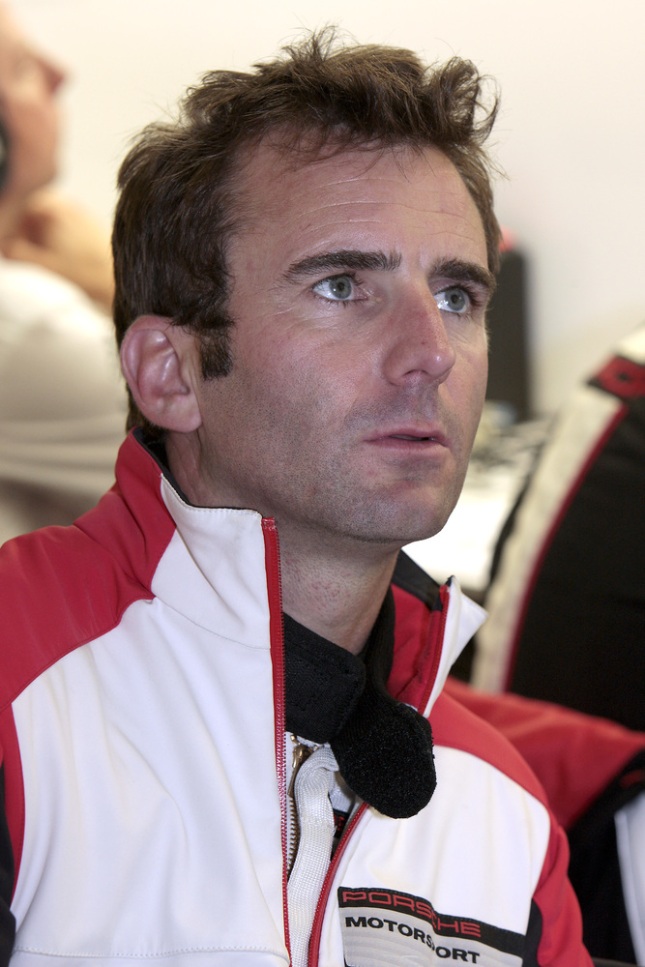 “Unfortunately I didn’t get the chance to drive during qualifying. I drove a couple of laps in free practice during the afternoon. It was great fun to be out on this track in a GT car.” 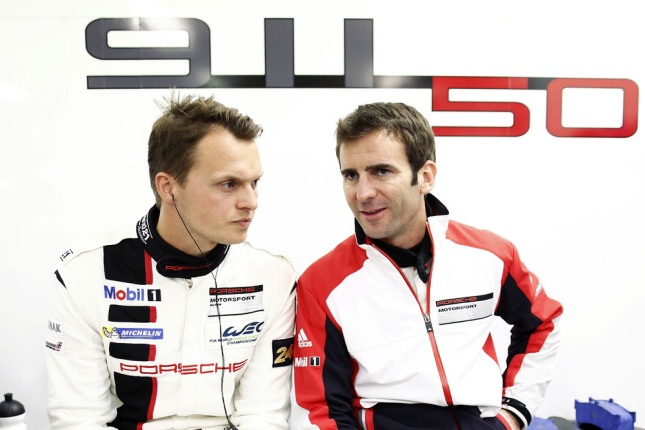 “Today was my first time with the car on new tyres. The balance is still not quite perfect. I hope that we can attack it again tomorrow.”

“We have made progress in all areas since the last race in Spa. On the straights we are still a little slower but we are closing in on our competitors. I’m getting to know the circuit better with every lap I drive.”

“I initially went out on used tyres to get a feel for the car. When I then tried to go for a good qualifying time with soft tyres the yellow flag came out at the first corner. Afterwards I only had time to turn the required mandatory laps for the night qualifying.” 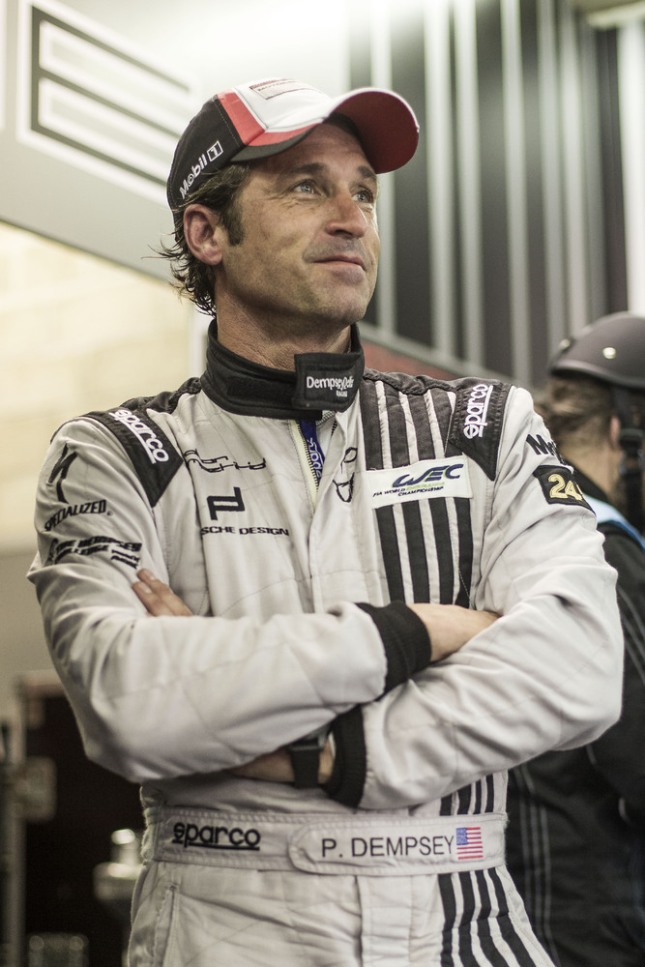 “I’m very pleased to compete in Le Mans with Porsche. This is really a fantastic experience. Of course there are still some things that need improving but it’s been quite a long time since I’ve driven laps at night on this difficult track. The Porsche is great fun to drive. I’ve learned a lot and I’m feeling confident that we’ll improve even more until the race.” 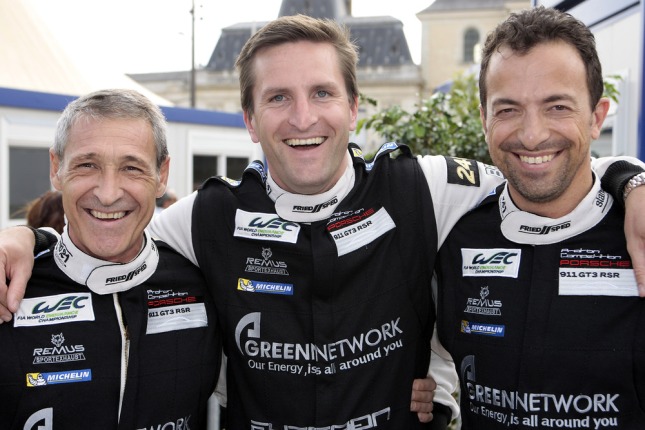 “I was almost a second quicker than in free practice. In the first chicane I was a little too quick and I lost the rear. Luckily I didn’t hit anything.”