You are all champing at the bit to get your hands on this eagerly-awaited book and I am too! The publisher/author Jacques Breuer would like to publish it as soon as possible.

They haven’t forgotten you, but to bring out a book like “Porsche 917-021, the fabulous story” means that they must be precise and accurate in every respect. That’s why they’re in the process of finalising the texts. Last-minute clarifications will make this book all the more interesting.

In the meantime, you can see the fabulous Porsche 917-021 in several videos below made by Daniel Frey.

It talks about the book and as soon as they start printing it, the author will be able to announce its publication date.

View some exclusive pictures extracted from the 500 photographs collected in the book.

Forty years in the history of the Porsche 917-021 described by an enthralling investigation that includes a journey to the heart of deepest Germany, trips to Stuttgart and Hamburg as well as the Black Forest, the Moselle region and the Rhine!

In 1970, 917-021 raced at Monza, Spa-Francorchamps, the Nürburgring, Le Mans, Hockenheim, Watkins Glen and Kyalami in the Endurance World Championship and the Interseries.

Discover the history and the technical secrets of its legendary 180° V12 engine, the car’s soul. Also pictured are its liveries and decorations starting with the classic red and yellow Shell paintwork and finishing with the two psychedelic colour schemes that marked its 1970 racing career….continue reading here

This book also describes the meeting with Joachim Grossmann, the only other man (with Count Rossi) to have registered a 917 as a road-going car!

The story of the Porsche 917’s exceptional restoration and its return to the track will give the reader never-before published insights into one of the greatest racing cars in the history of motor racing!

Video by Daniel Fery on Vimeo – chassis number 021 and the first laps of its new life.

The story of the Porsche 917’s exceptional restoration and its return to the track.

In April 1970, it was sold to the Finnish AAW team and then painted in the red and yellow colours of its title sponsor. The car’s first race, the Monza 1000 kms, was really an extended test session and it saw the flag in eleventh place. 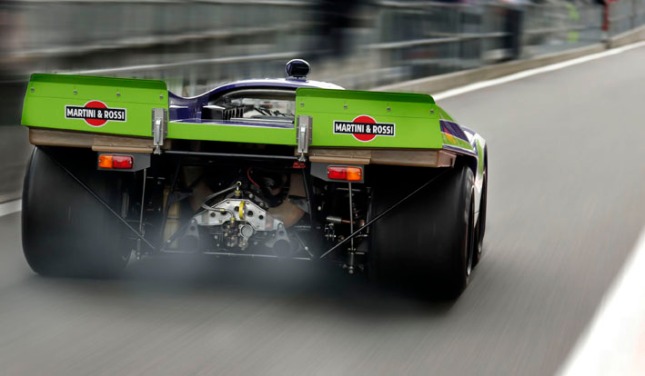 Next came the Spa-Francorchamps 1000 km in which Laine-van Lennep improved to fifth overall. Two weeks later tragedy struck at the Nürburgring when Hans Laine was killed in practice in the AAW team’s Porsche 908/2.

The 917 did not take part in the following day’s race.David Piper and van Lennep drove 021 in the Le Mans 24 Hours, but the Englishman crashed in pouring rain in the Dunlop curve when in third place. He brought the car back to its pit where it was repaired. Van Lennep went back out and was eliminated when a tyre exploded on the Mulsanne straight due to excessive wear caused by the twisted chassis. The 917 was sent back to the factory for repairs. Given the lack of time available before its next race (Norisring) Porsche took chassis 012 from stock. It had been repaired in Stuttgart and all the mechanical components from 021 were grafted onto it and the chassis was renamed 021.

On 28th June it arrived at the Norisring for the Interserie race with a provisional decoration: a white front bonnet and a yellow engine cover. Hans-Dieter Dechent, the Martini boss, then rented 021. He had it painted in the psychedelic mauve and green livery seen on the long-tail 917 (chassis 043) that came second in the 1970 Le Mans 24 Hours. 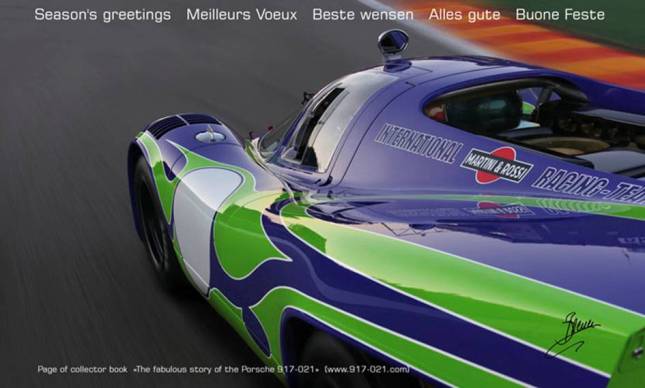 He entered it for van Lennep-Larrousse in the Watkins Glen 6 Hours in the USA and the CanAm event the following day. On 23rd August the Porsche sported a new red and yellow psychedelic livery, the AAW team’s colours, for the Keimola Interserie race in which it scored its first win. On 20th September van Lennep clinched victory no.2 in the Zandvoort Trophy.

In the Paris 1000 km 021 retired with blown valves with van Lennep at the wheel. The 917’s last race for the Martini team was the Kyalami 9 Hours with Siffert and Ahrens. The car had a 5-litre engine for the South African event and it saw the flag in second place. 021 then went back to Porsche where its engine was removed and installed in the 917 01-021 spyder for the AAW team in 1971. 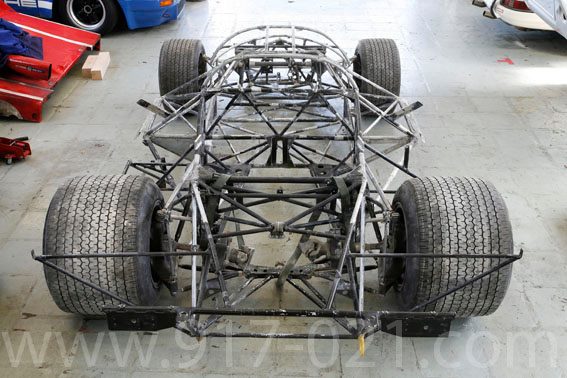 The original chassis and bodywork as sold to Manfred Freisinger in 1972. Three years later Joachim Grossmann bought and restored 917-021. He painted it white, detuned the engine and used it as his road car! In 1983, it was sold to American collector Don Marsh. In 1996, he put it back in to its Watkins Glen configuration although the colours and arabesques did not exactly correspond to the original livery.

Bobby Rahal bought 021 in 2002 and sold it on to Juan Barazi the following year.

Vincent Gaye purchased 021 at the end of 2007 and decided to carry out a full restoration. The car turned a wheel for the first time in 2011.