SITTING DECIDEDLY UPRIGHT, WITH BOTH SHOULDER BLADES firmly planted in the tall racing Recaro and both hands grasping the period Momo wheel, the view forward is paradoxically feminine yet masculine. 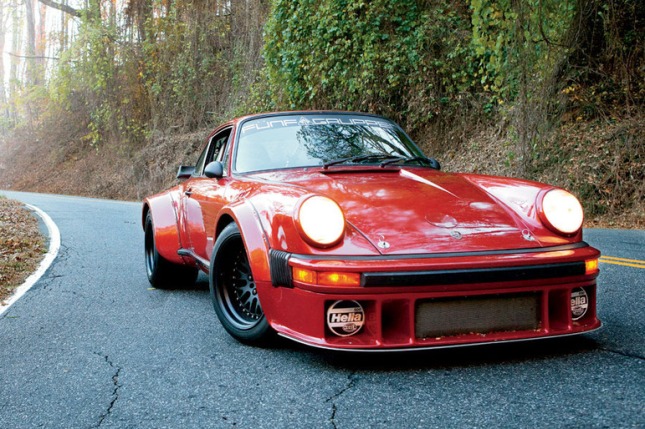 “When I get into a 911 after driving a Porsche racing car, it doesn’t feel like I’m in a completely different car,” said the late Al Holbert, who certainly knew his Porsche race cars and eventually took over running Porsche’s motorsports activities in North America.

After stepping out of the very real 934-002 and into the cockpit of this 934 replica, I know what he meant. But then, this car’s inspiration gives it an advantage, because the 934 remains Porsche’s most street-like race car to date.

After my left hand summons the ignition, a cacophonous rumble penetrates the cabin.

As the big, turbocharged flat six settles into a brutal idle lumpified by the long overlap of 934 cams, the undulations of each stroke of each cylinder pulsate the chassis. It’s such an experience that, before setting off, I open the door, get out, and walk to the back of the car.

Posted by dedeporsche on January 14, 2012 in Autos & Vehicles, Porsche

In tribute to Matt Drendel of the Porsche Community – CEO/Founder of Heritage Motorwerks LLC.

Matt Drendel was very special to many of us. For me he was like Family. We spent many of hours on the phone talking about everything from Porsches, Mark Donohue, Al Holbert to how much we missed our Moms who have passed away. He was like a brother from another Mother.

This one for me is going to take a long time to digest, but will never be forgotten. His everyday kindness was remarkable as he always had a smile and something nice to say no matter what when we talked or saw each other. He was always so proud to share what he had going on and always willing to hear an idea or get my opinion on something, it was as if we had a connection with each other from the moment we met.

Video Edited and Produced by @RLavigne42

The Porsche Community has lost an outstanding friend Matt Drendel and uber custodian of one of the most significant private Porsche collections in the world. Among many accomplishments in his 35 years Matt was CEO/Founder of Heritage Motorwerks LLC. The word Heritage is described as “Something that is passed down from preceding generations”, and at Heritage Motorwerks they simply followed in the footsteps of Porsche and their amazing appreciation for detail and how much pride they take in their product.  Heritage Motorwerks was founded by Porsche collector, Matthew Drendel and was initially formed as a group that would solely support and maintain his extensive collection.  Heritage Motorwerks was invited to Irvine, California to help in the filming of the Porsche Panamera “Family Tree” commercial. Matt being a avid Porsche collector had many of the cars in the Panorama commercial, including the 917/30, 962, GT1, 934, 935 and many others.

Matt provided a large section of his collection for the Heritage & Historic Display at Parade 2008 in Charlotte:
http://picasaweb.google.com/porscheparadephotos2008/HeritageAndHistoric#

Matt’s first word was probably “Turbo” and he put together what has to be the most comprehensive and quality collections of historic Porsche Turbo models in the world including the first Turbo, and a 917/30….too many more to list here. Matt’s father Frank has long been a “Porschephile” also. (quoted from a close friend named Tim Herman, N.C.  from the Porsche356registry.org)

Matt Drendel also drove a Porsche 996  GT3-R in the GT3 Championship in 2001 with Darren Law, David Murray & Cort Wagner. Pictures of some of Matt’s racing cars

The 964 chassis 911 Turbo 3.6 marks the end of an era for Porsche, as it was the end of the single-turbo, rear-wheel driven 911 Turbos, making it especially prominent amongst discerning Porschephiles. This particular example is especially significant as it is the exact car used in the popular film “Bad Boys”, starring Will Smith, Martin Lawrence and Tea Leoni.

Matthew Clayton Drendel was 35 and died quickly of a stomach aneurysm on November 24, 2010.  The Drendel family is highly regarded in the Porsche community and has contributed a great amount to the quality of life here. Survivors include his wife, Shana Hefner Drendel; father, Frank M. Drendel; son, Zachary Matthew Drendel; and daughter, Alyssa Leigh Drendel. Our thoughts and prayers are with the Drendel family.

Share your memories, express your condolences and add photos in the Guest Book for Matthew Clayton Drendel. ….Here View all “guest book entries for Matt….Here

Posted by dedeporsche on December 2, 2010 in Uncategorized